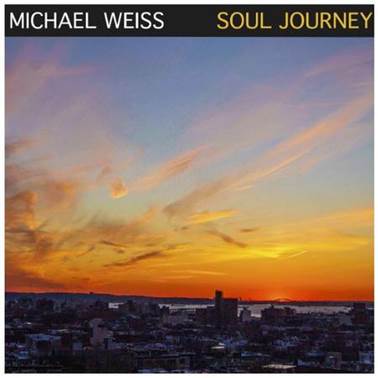 10/11 rated for music and sound by Michael Fremer at AnalogPlanet.com!

"Suave, swinging and exuberant, Michael Weiss's self-produced Soul Journey sounds something like a big band playing on a Blue Note Records date, but it's really a small ensemble making like a big one thanks to Weiss's deft, harmonically-rich, rhythmically neck-snapping arrangements and free-spirited yet tightly drawn, well-meshed performances by the three man veteran horn section of saxophonist Steve Wilson, trumpet and flugelhorn player Ryan Kisor and trombonist Steve Davis. ... The tape then sat carefully stored until very recently when Bernie Grundman used it to master this double 33 1/3 set pressed at QRP with plating by Gary Salstrom, packaged in Stoughton-printed jackets. Twenty years in the can has not dated this outing." — Music = 10/11; Sound = 10/11 — Michael Fremer, AnalogPlanet.com.

"Soul Journey is about as close to perfection as a recording can get. The production is superb.

studio. This should be in everyone's collection of good contemporary jazz, and if there is truly

justice in our world, a Grammy nominee." — Jazz Improv

Pianist Michael Weiss took home the Grand Prize in the 2000 BMI/Thelonious Monk Institute's Composition Competition for his song "El Camino," which is included on Soul Journey. Soul Journey features an exceptional program of nine intriguing compositions by Weiss, a composer and bandleader of the first rank, who moved to New York City in 1982 from his native Dallas, by way of Indiana University. Weiss quickly found work with Jon Hendricks, Lou Donaldson, Slide Hampton and the Junior Cook/Bill Hardman Quintet. In 1987 Weiss became Johnny Griffin's regular pianist and went on to record four albums with him. He has also worked with Art Farmer, Charles McPherson, George Coleman, Frank Wess, Jimmy Heath, the Jazztet, Pepper Adams, the Mingus Epitaph Orchestra, Gary Bartz and the Vanguard Jazz Orchestra. In addition, he has appeared with Wynton Marsalis on "Live From Lincoln Center" on PBS and "Making the Music" on NPR.

Soul Journey was recorded to 2" analog tape at 30 ips and mixed to 1/2" tape at 30 ips by legendary engineer Joe Ferla at Avatar Studios in March of 2000. It was originally released on CD in 2003. To date the original master tapes have remained in pristine condition. With today's resurgent interest in analog sound, Weiss decided to rerelease Soul Journey as a limited edition double LP set, sparing no expense to deliver a high quality all analog audiophile product.

"El Camino" is a sure winner, reviewer Dan McClenaghan writes about Soul Journey for allaboutjazz.com, but the album is full of other fine Weiss-composed songs: the upbeat opener "Optimism," the brooding title tune, and the brassy "Second Thoughts."

What is most striking about Soul Journey is the diversity of the compositions, the dexterity which Weiss develops his materials and the way the forms and improvisations merge into an organic whole. On "El Camino,"Weiss' expert tailoring fully exploits the sonorous potential of the trumpet, alto saxophone and trombone front-line and a fully interactive rhythm section. El Camino blends south-of-the-border rhythms with an active bassline, vivid harmonies and a lithe, through-composed melody adorned by an introduction, interludes, coda and background figures adding spice to the improvised solos.

"What's going to drive jazz forward is a greater integration of composition and improvisation rather than the same old head-solos-head format," says Weiss. "I want to keep the music fresh and interesting."