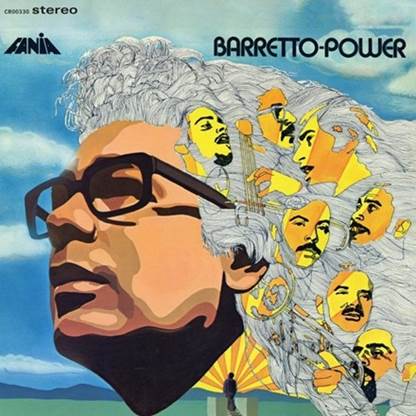 A master of the congas, Ray Barretto had a particularly wide-ranging and episodic career. As a bandleader, he headed groups that performed Afro-Cuban jazz and others that specialized in salsa. As a sideman in the 1950s, Barretto was one of the first to show that the congas could be a viable part of jazz combos that played bebop rather than Latin music. Celebrating the 50th anniversary of its release, this 180g vinyl LP reissue of 1970's Barretto Power features all-analogue mastering from the original tapes by Kevin Gray at Cohearent Audio and was pressed at Memphis Record Pressing. Unavailable on vinyl since its original release, the album includes such Latin soul and salsa classics as "Right On," and "Oye La Noticia."

In reviewing Ray's history as a composer, several themes are always pre-dominant – facing and overcoming adversity, jealousy and envy by others, relationships, and cultural pride. Opening tune, "Oye La Noticia," is no exception. Its harmonized vocal intro by Justo Betancourt and Yayo El Indio in a guaracha/guaguancó tempo challenging those who may be envious of Barretto and his band is definitely a show of strength and bravura to all challengers. Check out the interaction between Ray, Orestes and Tony during Luis's piano solo. The hip cierres (rhythmic breaks) they do exemplify a true working band that is tight and in the comfort zone with each other. Ray's solo is the coup-de-gras as he explodes on the montuno (vamp).

Roberto Rodriguez's "Perla Del Sur" is dedicated to his beloved birthplace in Cuba, Cienfuegos. It's a great example of the Cuban son tradition and Ray's ever present respect for tradition. Adalberto's soneo's (vocal improvisations) soar over the band. Another tasty Luis Crúz piano solo leads into Roberto's beautiful high register trumpet feature. "Right On", composed by Ray, is what best can be described as a rock/funk/boogaloo tune with its catchy unison bass and piano figure and its lyrics addressing Ray's pride in his multi-cultural NYC upbringing. Listen to René's hip jazz influenced solo over the funky bass line. It exudes Nuyorican soul. "De Que Te Quejas Tu," is an up-tempo guaracha where Adalberto gets to stretch his soneo skills. "Y Dicen," by bongocero Tony Fuentes, is classic son montuno that addresses the bands swing and sabor (taste) at a medium tempo. Rodriguez is featured as he slyly quotes "Stormy Weather" in his solo. Written by Cuban Hugo Gonzalez, the guaguancó/guaracha, "Quitate La Mascara" became a clarion call for lovers angry with their significant others lies and deceptions.

"Se Que Volveras" by pianist Louis Crúz is classic romantic bolero. Its clever arrangement has a cha-cha-cha section that leads to some nice interplay by the trumpets. The closer, "Power," is what can best be described as a hip son-funk-tuno that opens with one of Ray's classic bass and piano inventos (inventions). It features stellar work by René, Orestes, Louis, Andy and Ray proving this was a band with some outstanding soloists. Just look at the cover. It's the magic that can only be known as, Barretto-Power!