The Oscar Peterson Trio - We Get Requests 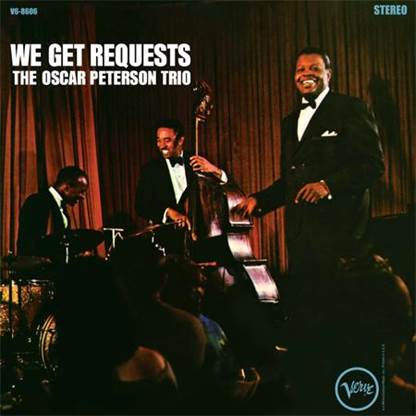 Mastered by George Marino at Sterling Sound from the original master tape!

"...these are all truly classic Verve titles that you simply don't want to miss...most importantly, the sound of these reissues is nothing short of astounding. Particularly the early Billie and Ella mono records are incredible treasures of sonic beauty. I'd definitely ask Santa for the whole set, or, if you want to cherry pick, the most classic titles. Whatever you decide, you owe yourself at least a half dozen!" Winner of a 2012 Positive Feedback Online Writers' Choice Award - Danny Kaey, Positive Feedback Online, November/December 2011

When Jim Davis started producing records at Verve, he changed the company's recording philosophy toward its most prolific instrumentalist. Where Norman Granz had produced countless Oscar Peterson albums dedicated to the popular song, Davis was more interested in making albums closer to how the Peterson trio sounded live. His first Peterson records were the legendary London House sessions. By the time of this album, there had been no personnel change in the trio for five years - so it is no surprise that the rapport among the musicians here is telepathic.