Various Artists - The Sound Of Jazz 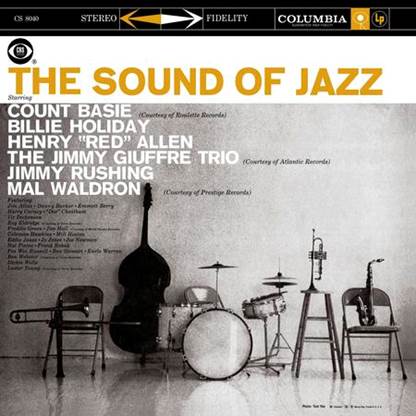 Mastered by Ryan K. Smith at Sterling Sound, from the original 3-track tape

"The only reason Classic Records failed to reissue this one back in the 1990s and 2000s is because the reel containing one side had gone missing. For this reissue Sony/BMG located the original 3-track recording from which this stereo record was sourced so it's one generation ahead of the mixed 2-track master. This tape probably hadn't been played in almost sixty years and so sounds remarkably fresh. ... Analogue Productions reissued this in a tip-on gatefold sleeve with great black and white photos taken at the recording session of Count Basie, Billie Holiday and Ben Webster. A moment in musical time perfectly captured that's easy to recommend for the music, the sound and the packaging. The reissue sound is somewhat drier than the original, which makes it all the more intimate and less dated. A great lacquer cut by Ryan K. Smith." — Michael Fremer, AnalogPlanet.com.

This 200-gram 45 RPM Analogue Productions LP reissue is a magnificent-sounding recording of a historic TV event. For a rare and glorious one-hour nationwide broadcast, CBS brought together 32 towering heavyweight jazz musicians of the swing era for the jam session to end all jam sessions. The dead-quiet double-LP, with the music spread over four sides of vinyl, reduces distortion and high frequency loss as the wider-spaced grooves let your stereo cartridge track more accurately.

"The Sound of Jazz" brought together 32 leading musicians — a Who's Who of the swing era — including Count Basie, Lester Young, Ben Webster, Billie Holiday, Jo Jones and Coleman Hawkins; the Chicago style players of the same era, like Henry "Red" Allen, Vic Dickenson, and Pee Wee Russell; and younger 'modernist' musicians such as Gerry Mulligan, Thelonious Monk, and Jimmy Giuffre. These players played separately with their compatriots (see the song list below), but also joined to combine various styles in one group, such as Red Allen's group and the group backing Billie Holiday on "Fine and Mellow".

Columbia Records released this LP in 1958 that is actually a rehearsal that preceded the telecast (recorded on December 4 at Columbia's 30th Street studios), and is not its soundtrack. The LP was released in 1958 as Columbia CL 1098, with liner notes by Eric Larrabee, and the cover photo is by Tom Yee. The recording doesn't include all of the performers on the TV show (Mulligan refused to participate because no additional payment was involved) and includes several who were not on the show. Bassist Walter Page rehearsed, and is featured on the LP, but collapsed on the way to the studio for the telecast.

For this Analogue Productions reissue we started with the original tape and the best mastering available — Ryan K. Smith at Sterling Sound did a stellar job, and naturally, plating at Quality Record Pressings was handled by master plating technician Gary Salstrom. Our 200-gram QRP platters serve up an utterly noiseless background that lets the superior sonics shine through.

The show's performance of "Fine and Mellow" reunited Billie Holiday with her estranged long-time friend Lester Young for the final time. Jazz critic Nat Hentoff, who was involved in the show, recalled that during rehearsals, they kept to opposite sides of the room. Young was very weak, and Hentoff told him to skip the big band section of the show and that he could sit while performing in the group with Holiday.

During the performance of "Fine and Mellow", Webster played the first solo. "Then", Hentoff remembered: "Lester got up, and he played the purest blues I have ever heard, and [he and Holiday] were looking at each other, their eyes were sort of interlocked, and she was sort of nodding and half-smiling. It was as if they were both remembering what had been — whatever that was. And in the control room we were all crying. When the show was over, they went their separate ways."

Within two years, both Young and Holiday had died.

6. The Train And The River – Giuffre